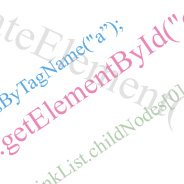 Whether you use a JavaScript framework, or you are a purist and always resort to coding your client-side scripts from scratch, there are certain DOM methods with which you should be at least a little bit familiar.

It’s true that a library like jQuery or MooTools will perform these methods for you, behind the scenes. In fact, if you rely on JS libraries for virtually all your JavaScript code, you’ll rarely have to use any of these methods directly.

But the reality is that, whether we develop as freelancers or work for a development firm, we may not always have the luxury of working on fresh projects where we can pretty much do what we want; we may have to maintain sites that rely on “obtrusive” scripting methods, or, for one reason or another, we may not be permitted to use certain libraries.

Whatever your situation, the following review of various practical DOM methods will hopefully serve to bolster your JavaScript knowledge and possibly help you more readily see practical solutions to various client-side issues.

This is a no-brainer. Every JavaScript coder should be thoroughly familiar with this method of accessing virtually any element in the DOM. Here is the syntax:

Notice the literal element has been replaced by a variable (which would be defined elsewhere).

The getElementById method places whatever object you want to access (for example, a specific link on your page) in a variable called myVariable, allowing you to access that object directly.

So, if you had a link on your page with its id set to “my_element”, you could now apply the following code to that element:

With the above code, your link will become a block-level element with a red background and a blue border.

When you first start using this method, you’ll probably be scratching your head, wondering what you’re doing wrong, trying to figure out why you’re getting an error. Just keep in mind that JavaScript is case sensitive, so you’ll commonly see this:

At first glance the above code looks exactly the same as the first code block. Do you see the difference? The case of “Id” has been changed to “ID”, which is a very common mistake for beginners. But after the first few times making that mistake, this method will become old hat.

Another drawback to this method is that you have to apply an id in your HTML to whatever method you want to access. So, while getElementById can be very powerful, it can also encourage messy code, as it forces you to clutter your markup.

If you want to keep your markup clean, this method will help you to do so. getElementsByTagName allows you to traverse the DOM looking for all the elements on your page with a specified tag name. Here is the syntax:

With that one line of code, the variable myLinkCollection becomes an array holding all of the anchor elements on your page. There are so many ways you can take advantage of this method, so I won’t go into too many details here, but here is one powerful use for this method:

Don’t get overwhelmed if you don’t understand everything going on above. The purpose of this code snippet is to show you a practical use for the getElementsByTagName method.

After you’ve collected your links into an array, you use a for loop to navigate through all of them. When you find one that has the class “link_class” attached to it, you apply a click event to that link that will trigger a background color change on that object.

You might wonder: Why not just apply an id to the link and use getElementById to access it directly? getElementById only allows you to access one element, since ids cannot be shared. So, with the above code, you can have many different links with the same class name, and they will all respond to the click event, which, in this case, changes the background color of the link that is clicked.

I’m sure I could write a few paragraphs on the different methods of accessing “nodes” in the DOM, but I think a basic overview of the possibilities will suffice for our purposes here. A “node” is essentially any element on your page within the DOM structure, including whitespace and text that would be in between XHTML tags.

The different node methods available through DOM manipulation are as follows:

In each case above, the italicized “node” would be the object you are referencing. Let’s illustrate the diversity of these methods using a simple example:

Suppose you have this XHTML:

We can access the first link in our unordered list using any one of the following 3 sections of code:

The resulting “alert” message in each of the above cases will be the same: It will display the class name of the first link in the list. The same element is accessed using different node methods. The third example is especially convoluted, and not recommended; i’ve included it here for the purpose of illustrating all the node methods.

In theory, this code works — however, you won’t get the same results with every browser. Firefox, for example, will display a JavaScript error message telling you that an object is not defined –while IE7 will alert all 3 messages just fine. The reason for this is that Firefox views whitespace as a node. There are ways around this, which require checking node values to ensure that the accessed elements are legitimate objects, and not just whitespace.

So use these node methods selectively and carefully, and test them accross browsers before deploying.

This method does exactly what it says: it creates an element and allows you to place that new element anywhere in the DOM structure.

Using the list example from above, we could add a new list item using the following code:

The above code creates a new <li> element and a new anchor tag. But these elements don’t exist anywhere except as values inside variables. To add our new elements to the DOM, we can use the next method listed in this article.

Let’s add the two elements we just created to our list of links using the appendChild method:

The above code adds a new anchor tag inside of a new <li> element at the end of our link list. Keep in mind that this new element will have no attributes and will not be viewable in the source code, since it is a fresh, dynamically created element. If you’re using the Firefox Developer Toolbar, you can use the “view generated source” option to view the new element in context, but the browser’s built-in source code reader will not show you any client-side-generated markup.

This brings us naturally to our next method.

In order to remove the element that we just created, we would use the following code:

The getAttribute method allows you to access the value of any attribute on any element on your page. For example, going back to our list of links, suppose we had the following code:

We’ve added a new link with an id of “link_5” and a rel attribute with the value “external”.

If we want to read the rel attribute of the fifth link in our list, we would use the following code:

Now the value of the variable myLinkAttribute will contain the rel attribute’s value, which, in this case, is “external”. This method could be used to target links with specific rel values so you can open those links in a new window.

Writing a new value for a given attribute is another useful method, and can be used in conjunction with getAttribute. Let’s say we wanted to change the value of the rel attribute from the previous example. Here’s how that is accomplished:

With the above code, the fifth link in our list would now have a rel attribute with the value “nofollow”, instead of “external”.

Keep in mind that an attribute can not only be changed, but it can be added. So, if our fifth link did not have a rel attribute, the above code would still work, and would create the rel attribute and assign it a value on the fly.

Almost every website that you work on will have a form of some sort on it. While you can access a form or form element directly using getElementById or another method mentioned above, the best way to access any given form is using the document.forms syntax, which is basically acessing the “forms” collection of the document object.

For example, look at the following XHTML:

We could find out the “checked” state of any of the checkboxes with the following code:

In the above example, the alert message will display “true”, because the checkbox that we’re accessing (“option1”) has its checked attribute set. If we change the code to access “option2”, the result will be an alert message of “false”.

And here is the loop that will alert a message that displays the “value” attribute of the selected radio button:

The innerHTML property is an interesting beast. Firstly, it is a nonstandard element, but is very well supported accross all browsers and platforms. IE evidently has a few problems when accessing this property inside of a form, but generally it has good support.

Basically, innerHTML is a way of accessing, for the purpose of writing to, the content inside of an XHTML element. It comes in handy with Ajax requests because you can choose an element on your page, then write the Ajax-loaded content straight into that element via innerHTML. Here’s a simple example:

With the code above, the element on the page with the id of “content” will now have content between its tags consisting of the text “This is the dynamic content created by the innerHTML property” wrapped in paragraph tags.

The innerHTML element can also be read directly and appended to. (Thanks to Stacey in the comments for pointing out my error in regards to the drawbacks of this property, which I’ve corrected here.)

Know Any Other DOM Methods?

Well, I hope you enjoyed this list. I tried to cover some practical DOM methods that I’ve personally used on many projects, and even a few that I haven’t used too often but that I feel could offer solutions to various issues on the client side.

Although I didn’t delve too deeply into the intricacies of these DOM methods, I encourage all beginner and intermediate JavaScript coders to research each of these methods more fully, so as to have a stronger grasp of how the DOM is manipulated. Even if you rely heavily on JavaScript libraries, knowledge of essential DOM manipulation is a huge plus, as it helps you fully understand the different methods of accessing, adding to, and removing, page elements.