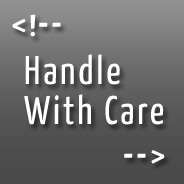 In a previous article I pointed out an interesting little trick that was made popular by Paul Irish, and has been added as part of his recently-launched HTML5 Boilerplate.

I love that boilerplate, and I wish I could say I understand everything in it. Paul’s a front-end genius and all developers should pay close attention to what he’s been doing lately.

But I have to say that I strongly disagree with Paul’s inclusion of that conditional comments tip in the Boilerplate, because it does not encourage cross-browser, maintainable CSS, but instead encourages CSS developers to consider Internet Explorer development as an afterthought.

Before I explain my specific reasons for wanting that technique removed from the Boilerplate, I’ll first discuss what exactly I’m talking about.

The only browser that would have that style applied would be IE6. So just like that, you’ve saved an HTTP request and you’ve kept your CSS valid. Great tip, and great outside-the-box thinking to come up with something like this. It’s one of those tricks that you wonder why nobody mentioned it before. (Actually, at least one person did, but I guess they weren’t as charming and convincing as Paul!) And the benefits to performance go beyond what I’ve mentioned here, so check out Paul’s original article for details on that.

Wait… Is It Necessary for Every IE Version?

Absolutely not. In my opinion, outside of a few minor instances where IE7 won’t behave, the only CSS hacks or workarounds you should need are those associated with IE6. I wish I could say that you can code valid, cross-browser CSS that works in IE6, but I’d be lying if I did. IE6 has some major issues that need different styles and scripts to get a similar experience. But since IE versions 7+ do not have most of the positioning and layout bugs that IE6 has, then why would you need all these different classes in a default template?

This solution tends to encourage developers to largely ignore IE during development, and just hack it into submission at the end. That’s actually the worst thing you can do when writing your CSS, because it will force you to use hacks or workarounds that aren’t necessary and can be avoided by just coding things to work in IE from the start. And why on earth would anyone need different CSS for IE8 and IE9? If you can’t get a design to look the same in Firefox 3+, Chrome, Safari, and IE8+, with the same CSS, then you’re not coding it right. And in most cases, I would even add IE7 to that list.

As I’ve written before, if your audience (or potential audience, for a new project) has a large percentage of users on different versions of IE, your focus should be getting IE to work with the most efficient, maintainable, and hack-free code possible. If instead you wait until the end to add all your IE “fixes”, then you’re going to end up with a bloated and unmaintainable stylesheet (or multiple stylesheets, if you use external files).

Do It Only For IE6

So do what you need to do to get IE6 to work (which might mean an external stylesheet, a hack, or an IE6 html element class), but use good logical and best-practice CSS for the other browsers (including IE7 and IE8) and you should be able to get a virtually identical experience in all of them.

I think the Boilerplate does a great job of defaulting a ton of best practices techniques, but in this case it doesn’t. Its not best practice to have separate styles for IE8 and IE9. So if you do use the Boilerplate as your default, do yourself a favour and change the section on classing the html element so it looks like this:

Your cross-browser CSS skills and website performance results will thank you for it.