I think everyone should be willing to look back at their older work and laugh and realize how far they’ve come. Even the best designers, developers, and bloggers have past work that they cringe at today. Heck, I cringe at stuff I wrote six months ago!

So with the help of Archive.org and WordPress’s easy-to-navigate paging system, I thought it would be fun to cause a whole bunch of people tons of embarrassment by rounding up some of the earliest articles I could find on various popular web design blogs. Enjoy.

It seems this isn’t the earliest article on ALA, but it is “Issue 1.01” so I think that’s good enough. This post has everything. A crazy 90s design, content broken into multiple pages, and the whole thing sits on a wonderfully ancient set of HTML frames. But hey, at least it has a doctype.

This is actually archived on a different domain that was part of SitePoint’s network back then. Compared to the ALA design above, this relic looks modern. Nonetheless, the heavy use of Verdana, the endless clutter, and cheesy logo are unforgettably cringeworthy. Oh, and this one doesn’t have a doctype — extra points to Zeldman.

Chris Coyier’s site is a late starter (2007), so nothing too much to cringe at here. But anything with an Amazon ad displayed prominently is worth including in this list. His actual first-listed article is linked above, but it’s not archived with the original layout, so the screen grab is showing a different article.

Again, because archive.org only goes back so far, the screen shot I’m using is from a later article, but the link is to the earliest dated piece. Honestly, anything that starts out with the phrase “Web 2.0 dominates” is certainly worth a read. :)

Jakob Nielsen’s Alertbox: History has a Lesson for HotJava

Alertbox doesn’t seem to have anything on Archive.org. But no worries, the design hasn’t changed since this first post. Does anyone even know what “HotJava” is??

Paul Irish: What does your sleeping style say about you? 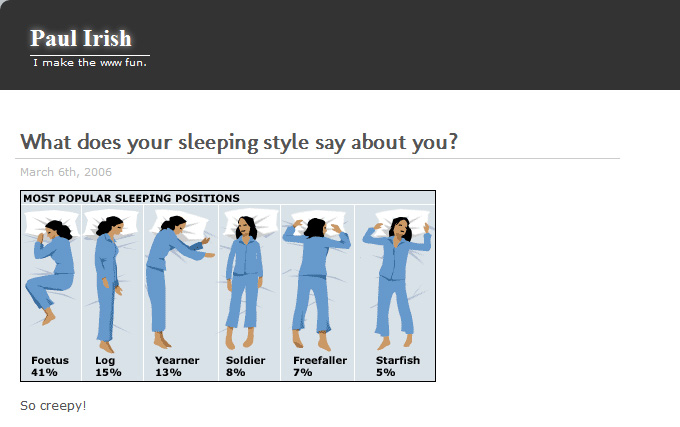 This is actually his second oldest post. I guess Paul’s site wasn’t always a web dev blog. :) His first dev-related post is something on animated gifs. But what I really want to know is if he still uses the screen name KingOfABigDeal. 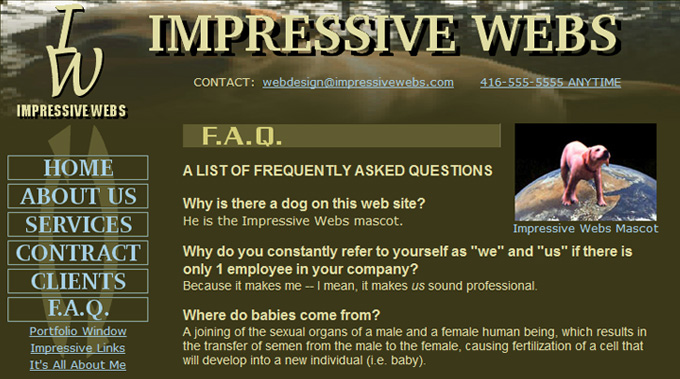 Since I’m embarrassing a lot of people, it’s only fair that I include myself. I’ve actually owned this domain on two different occasions — in 2001-2002 and some time around 2007. I originally let it expire and bought it back for $150 from a squatter . The screen shot above is from the F.A.Q. page. The first article on my modern-day blog is here.

The entire site at that time was actually a parody of typical web design sites back then. The F.A.Q page was an instant classic, so be sure to check that out. Even the other pages are little else but over-the-top fun-poking at web design agency sites of that time period. And yes, that is my pleasantly-plump 140-pound Labrador Retriever in the screen shot. He eventually died at age 13 of eating too much Greek food. :D

Don’t be afraid to put yourself out there. Everyone starts at the bottom. Even though you’ll hate it later, what you create today will make you who you are tomorrow. And now I’ll stop sounding like a public service announcement.