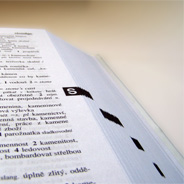 Over the years I’ve continued to refine my understanding of front-end development terms, especially CSS terms and definitions.

I’m constantly reminded that as developers we should be consistent in the use of our terms. This post will attempt to list all common CSS terms, and what they represent in CSS code. Much of this is pretty easy stuff for most experienced developers, but some is not used as often colloquially or in writing, so a refresher could help clear up some inconsistencies.

A comment has no effect on the display of the page that’s styled; it’s for the CSS author to read and better understand the code. Comments are universal to (as far as I know) all programming and related languages. In the example below, the line that says “this is an old IE6 hack” is a comment:

A style rule (also called a rule set) is a single section of CSS including the selector, the curly braces, and the different lines with properties and values. The code in the example below comprises one style rule:

A declaration block is the section of CSS where the property/value pairs appear. In the example below, everything found between the curly braces (not including the comments) is a declaration block:

A declaration is generally any single line of CSS that appears between the curly braces, whether shorthand or longhand. In the example below, everything after the first curly brace, and before the last curly brace (not including the comment) is a declaration:

In this next example, there are two declarations between the curly braces:

A property is what appears before the colon in any line of CSS.

In the example below, the word “width” is the property.

A value is what appears immediately after the colon in any line of CSS.

If you use shorthand, a single declaration could have multiple values.

A selector is the part of the CSS line that selects what element to target with the property/value pair. In the example below “#container #box” is the selector:

The selector in the example below targets an element by its class name. So every element with a class of “navigation” will receive the styles in question:

The selector in the example below targets an element by its ID. So every element with an ID of “navigation” will receive the styles in question:

In HTML, a page will have validation errors if two or more elements share the same ID.

So, any element that appears as a descendant of the unordered list element inside an element that has a class of “navigation” will receive the declared styles.

An attribute selector selects an element to style based on an attribute and/or attribute value. The example below targets certain paragraph elements based on the existence of a “style” attribute:

The example below targets certain input elements based on the existence of a type attribute with a value of “text”:

In each example above, everything before the first curly brace is an attribute selector.

A pseudo-class works similarly to a regular CSS class, except it’s not explicitly declared in the HTML. In the example below, the pseudo-class is added to the anchor element:

A pseudo-class always has a single colon followed by a keyword of some sort, with no space before or after the colon. Other pseudo-classes include :visited, :focus, and :first-child.

An at-rule has nothing to do with Star Wars. An at-rule is an instruction given in a CSS document using the @ character. An at-rule could have a declaration block or a simple string of text. The example below has two different at-rules:

The at-rule is not just the “@media” or “@import” part at the beginning; the entire instruction comprises the complete at-rule.

A statement in CSS is any at-rule or rule set. In the example below, there are two statements; one is an at-rule, and the other is a rule set:

An identifier can be anything that appears as a property, id, class, keyword value, and at-rule. In the example, below there are four identifiers:

A keyword is a value for a property and is somewhat like a reserved word for a particular property. Different properties have different keywords, and all properties allow the keyword “inherit”. In the example below, the value “auto” is a keyword.

As an aside, I would argue that !important qualifies as a keyword, based on how keywords are differentiated from values.

I think this covers most, if not all, of the most common and general CSS terms you might see in articles, references, and tutorials. There might be some others that are more specific that I didn’t include here, but maybe I’ll do another post that includes an explanation of those more complex terms.

Did I miss any obvious CSS terms? Let me know in the comments.