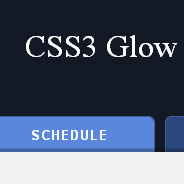 The other day I visited the jQuery Conference page, and immediately fell in love with the beautiful design and CSS3 technique applied to the tabbed navigation on that page. Visit the site in a Webkit-based browser (Chrome or Safari) or Opera 10.5, and you’ll see a nice “glowing” rollover effect along with a subtle inner shadow at the bottom of the inactive tabs.

But that’s not all; they’ve also applied some rounded corners and gradients to complete a very nice effect. All with no images — just progressively enhanced with CSS3 so it degrades in non-supportive browsers. I immediately set out to recreate the effect, and I thought I’d write it up so you can see how CSS3 can create intuitive and beautiful interfaces with no images.

View the demo, or look at the example on the jQuery Conference site, if you want to review what I’ll be describing.

Most of the CSS and HTML is pretty straightforward, so I won’t bore you with those details, I’ll just focus on the two primary effects that make the tabs so visually appealing. First of all, I figured since it was a website related to the jQuery library, then they must be using jQuery for the “glow” effect. I’ve seen the effect before, and it’s usually done with JavaScript. In this case, they’re using CSS Transitions, and it’s dead simple to produce:

If you’re unfamiliar with how the above code works, here’s a CSS transitions 101 lesson: The -propietary-transition declaration is shown above in shorthand for 3 different rendering engines, and according to the Webkit website, here is what the three values represent:

transition-property — What property should animate, e.g., opacity.
transition-duration — How long the transition should last.
transition-timing-function — The timing function for the transition (e.g., linear vs. ease-in vs. a custom cubic bezier function).

The second section in the CSS gives the hover event for the navigation tab, and this combines to create the animated “glow” effect. If a browser doesn’t support the transition, then it just does a straight hover without the glow.

This is the tough part, and it does unfortunately muck up our markup a little bit. But it’s a nice effect, and you could always use JavaScript to create the extra element to keep your markup clean. In the HTML, we add an extra empty list item at the end of the list, giving it a class of “shadow” and style it with the following:

The key parts of the above CSS are:

Rounded Corners and Gradients to Boot

Finally, the effect is completed with the CSS3 border-radius property and a CSS3 gradient on the active tab. The gradient has an IE-only filter applied (in my example), so IE does get a fraction of the effect.

And that’s pretty much it. The rest of the CSS is just your usual run-of-the-mill tabbed navigation styles. I’ve also included some jQuery to change the selected tab.

The full effect works in Chrome, Safari, Opera 10.5, and Firefox 3.7. Technically, Firefox 3.7 has not been officially released, but according to Mozilla CSS3 transitions will be included in that version.