Baseball season is in full swing in North America and I’ve noticed some nice changes to the design of the MLB.com website. In addition to changing their Flash content slider to JavaScript, they’ve also started to supercharge their design with some CSS3 enhancements.

On the game wrap-up pages, there’s some subtle use of rounded corners, opacity, and text-shadow, the latter of which I’ll be focusing on here.

The experience on the site is pretty similar on older versions of IE as it is on modern browsers. Here’s a screenshot of a game wrap-up page in IE6: 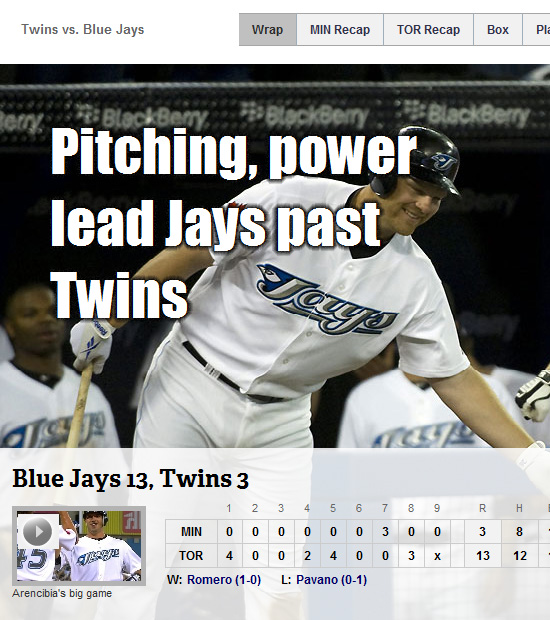 As you can see, the big block of Impact text has a slight drop shadow applied, even in IE6.

Here’s how the same page looks in Chrome 10: 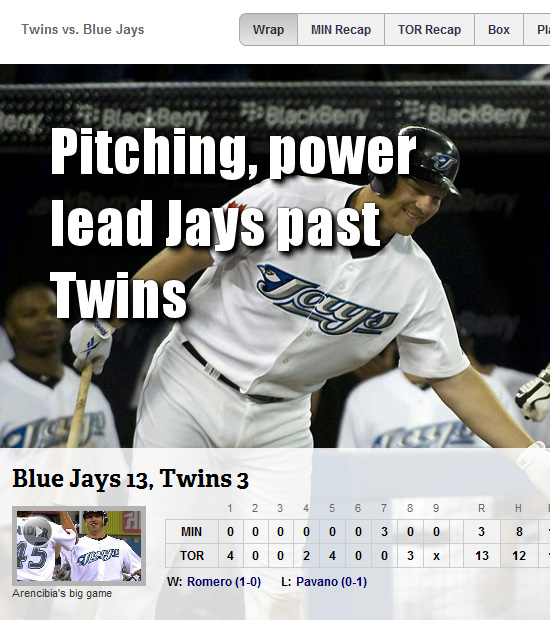 Not much difference. The shadow is a bit stronger, and there are rounded corners on the nav/box section at the top that don’t appear in the IE6 shot.

I would have thought they’d be using a script like this one or this one, or even the Microsoft-only shadow filter. While those are options to consider, MLB.com is instead using the proprietary glow filter.

Here’s the syntax taken right out of the MLB.com source:

In that particular MLB.com example, they’ve layered multiple text-shadows using the CSS3 standard syntax, and then used the glow filter (shown above) to create something similar for IE.

The glow filter lets you set the color and the strength. The strength is a value in pixels, but you don’t use a unit, just a number. From my limited testing, it’s a pretty ugly filter, and might only come in handy in a few instances. Also, if you have another filter declared on the same element (opacity, for example), the second filter will take precedence (as per the CSS cascade). So this will not work:

Instead you have to separate the filter functions with commas on a single line:

Of course, this opacity setting does not just affect the black “glow”, it will also affect the text to which it’s applied and any child elements–as is always the case with traditional CSS opacity.

This is by no means a one-size-fits-all solution, but if you have a simple text shadow that you want to present to IE users, and you prefer to avoid using a bloated script or plugin, then this single line of code could work.

In the example above, if you were to remove the text shadow from that text, the text would be less readable. So it’s understandable why the developers aren’t just letting IE see plain text. White text on ever-changing photos is not going to look very professional, if legible.

But in many cases, you’d be better off not using a filter or any kind of script. Let IE see a lesser experience, and save the good stuff for the better browsers.

Also, even though the IE filters are not loading up any extra scripts, they still have performance issues and can slow the rendering of the page. So again, if you can avoid them, then do so.