For the purpose of CSS styling, elements can be generally divided into a few different categories. Two of those categories are block-level elements and inline elements.

In my opinion, this is one of those areas that, once understood correctly, can help beginners to take their CSS skills to the next level.

A block element is an element that has, but may not be limited to, the following characteristics:

So, for a block element, it’s not necessary to give it a set width or to give it a width of 100% if you want it to fill its parent horizontally. In fact, doing either of those things may cause maintainability issues or other undesirable problems.

And, as the fourth item in the above list indicates, it’s also not necessary to “clear” a block element; assuming no floats are affecting the block element, it will be cleared automatically and will start on the next “line” in the page’s output. 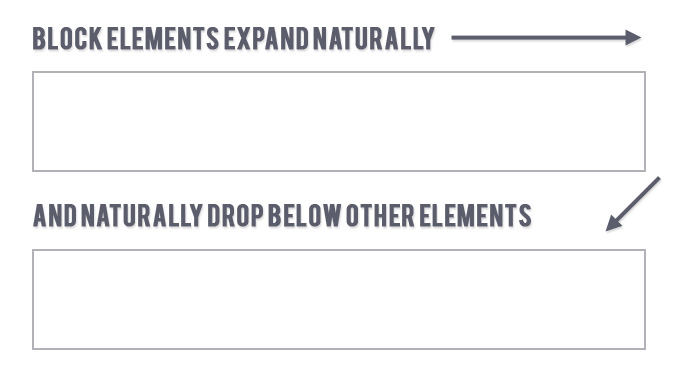 An inline element has, but may not be limited to, the following characteristics:

The easiest way to picture an inline element is to think of it as a box that acts like text. What happens, for example, to text that’s not separated by other elements? It flows one letter after the other. If you put an inline element next to text, it will flow next to that text just like another piece of text. 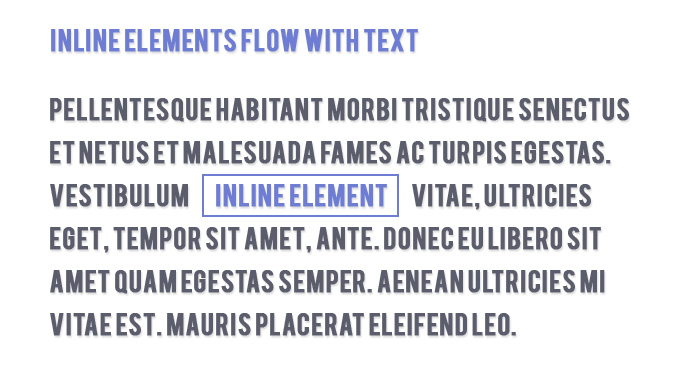 You’ll notice that the examples of both block and inline elements are quite revealing: The block examples are structural elements, while the inline elements are text-based. This is an easy way to remember which is which, although at first you will sometimes be confused.

You have the option to change any block-level element to an inline element, and vice-versa, using the display property. So keep that in mind if you need to do this. But don’t use the wrong element for the wrong purpose. An SEO guy once told me to put an <h2> element inside of a paragraph, and style it to look like regular text, because he wanted an SEO boost. Not a good idea, that’s what <em> is for.

One final thing to note is that, although from a CSS perspective block and inline do exist, from an HTML5 perspective, the different types of elements have been re-categorized, so that they’re more specific. You can read about these content models in the WHATWG HTML5 spec.

At the beginning, I said that block and inline were just two types of content. Generally speaking, those are the two primary kinds, and you won’t have to worry too much about any other kinds.

But there are what are referred to as replaced elements. Basically, these are neither block nor inline. But you might classify them as something closer to inline, but with block-like structure.

I won’t provide a detailed explanation here; you can check out the SitePoint article linked in the previous paragraph for full details. But some examples of replaced elements include:

If you’re just starting out with CSS, understanding the behaviour of block vs. inline elements will go a long way to helping you code sites that are efficient and maintainable and don’t rely on overuse of floats or other undesirable methods.