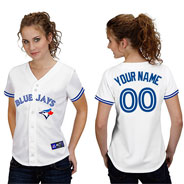 A colleague today mentioned the 2013 Toronto Blue Jays — a much improved team compared to what was fielded in 2012. It’s owned and operated by Rogers Blue Jays baseball Partnership, a division of Rogers Communications

I opened up their website and scanned through it, quite excited by the upcoming season and the game schedule. It was only when I clicked through to their team roster that I saw this:

I had to go back and check a second time to be sure: 40 athletes, all male. Not a single woman (at the time of writing).

I can’t remember the last time I saw a baseball roster with this many names, which only makes it worse. If they’d featured one woman alongside 39 men, it would’ve been embarrassing. To feature none looks almost deliberate.

The lineup of players is brilliant — there’s some of the leading hitters and pitchers of the MLB scene on that list. But none of them are women. Are there no women out there worth a place amongst these 40 baseball experts?

Via telephone, I put this question to Alex Anthopoulos, the team’s General Manager. He wasn’t happy with my accusation that the team’s roster was “inexcusable”, though:

Who is this? How did you get my number?

I pressed him, asking him if he really didn’t think there were any worthy female athletes to be found. He replied that my argument was a straw man, and that he wouldn’t be “debating” it further. I was massively disappointed (and haven’t heard back since, despite further requests for clarity and a pending restraining order).

Now, I’ve seen Anthopoulos speak at news conferences before and he’s very good — a talented GM, innovative thinker and all-round nice guy. I don’t for a minute think he’s sexist or deliberately curating a roster which doesn’t include any female players. His refusal, though, to engage with my (and others’) concerns about the representation that the Blue Jays organization offers, is a big issue for me.

His comment about ‘not knowing how I got his phone number’ doesn’t cut it in 2013. I’ve seen excuses from other criticised GMs, saying that they couldn’t find any female baseball players, or the ones they asked didn’t want to play, or that their minor league system just doesn’t have that many female prospects — I don’t think it’s good enough any more.

I don’t know what their drafting process is, but if it was me running the team, I would explicitly not be satisfied with a process that resulted in 100% male baseball players. I would have stopped once we’d reached, say, 31 male out of 40 possible draftees (being pretty conservative, I think) and insisted that the remaining 9 (a cool 22% female representation) would have to be women.

And, if I’d genuinely been unable to find any women using my mysterious “drafting”, or all the ones I’d asked weren’t interested, or some freak event meant that any available woman was swept into a hurricane on opening day and would be unable to play, I would have added a note stating as much, prominently, underneath the roster of 40 men, not leaving it to fans to draw their own conclusions about my interest in encouraging equality at sporting events.

I appreciate the hard work and often high costs that go into organising a baseball season. It’s perhaps unfairly easy to pick on athletic-focussed events for being overly male in demographics, especially in a sport where female representation is particularly low. The NFL’s own recent football season was poorly supported by women, both in terms of players and fans — this stuff is hard.

But with the recent high-profile cancellation (delay?) of the NHL hockey season with a similarly poor female representation (although we could discuss the black/white thing too…), I honestly can’t fathom why anybody organising baseball teams in 2013 doesn’t have this stuff tattooed onto their frontal lobe. Look:

I don’t want to start a Twitter mob or cause a baseball season to be cancelled. But I do want to know why a well-intentioned group of scouts and front-office staff have managed to create a season stunning for its cheap ticket prices, its strong athletic talent, and its hugely disappointing lack of the most basic diversity — and it won’t even acknowledge there’s a problem.

The Blue Jays are often referred to as “The Boys of Summer”. I think it’s time they adopt a more politically correct moniker — and mean it.

Please Read This Before Commenting!

If you’ve been keeping up with the latest in web drama, then you know why I wrote this mock/parody piece. So just to set the record straight:

This post is not intended to suggest that I think it’s okay for conferences to intentionally exclude female speakers. Far from it. But sometimes it will just happen that way, based on interest, availability, and other factors. Sure, it might be mildly surprising to see an all-male conference line-up. But I choose to assume the best in the organizers.

Overall, I think this is a non-issue, and I couldn’t agree more with this tweet by Jeff Atwood:

@eaton @kurafire it’s a boring issue to me, like why aren’t there more black hockey players. My answer is: who cares, let’s play hockey.