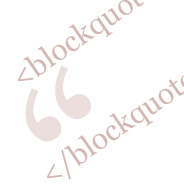 This brief and easy tutorial provides a method to indent multiple lines of text around a background image on a styled <blockquote> element.

When I wrote the previous post, listing 25 classic web design articles, I included a styled <blockquote> for each of the listed articles. This is obviously nothing new; virtually all design blogs have a fancy blockquote styled with a double quotation mark in the background or something similar.

But when I was laying out the blockquote in Photoshop, I didn’t like the way it looked with the entire left side indented. Here is how I originally intended it to be:

So I experimented a little bit and decided this looked better:

But CSS does not have a way to do a multi-line indent. So, with a little extra markup I came up with a simple solution. It’s actually quite easy and probably has been done before, but I have never seen it documented.

Here is the HTML code:

The only extra markup is the <span> tag pair at the very front of the quoted text.

Here is the CSS to style the <blockquote> and <span> elements:

First of all, I’ve styled the blockquote with a background color, a background graphic (offset slightly to harmonize with the padding on the next line), a border, and a set width. Nothing new here — you can obviously style yours how you want.

The second part of the CSS affects the extra <span> element. First, the span is converted to a block-level element (it’s in-line by default). Then it’s floated left, the same way you would float an image to allow text content to wrap around it. Then, the width and height of the span are adjusted according to the size of the quotation mark in the background, so it gives the impression that the quotation mark is actually causing the indented text. In fact, you could apply the quotation mark as a background on the span element itself, which would produce the same result. I just chose to do it this way.

When displayed, the blockquote now looks like the second example shown above, with a multi-line indent. Since you cannot indent multiple lines with the text-indent property in CSS, this slightly nonsemantic method provides a possible alternative.

And that’s basically it. Just include that extra span element, and your CSS will style all blockquotes the same way. Optionally, if you’re concerned about the extra markup, you could dynamically create the span element via JavaScript, using the createElement method, or an equivalent method provided by your favorite JavaScript library — and the CSS will style it accordingly.

If anyone has a simpler solution that doesn’t use extra markup, I’d love to hear it!