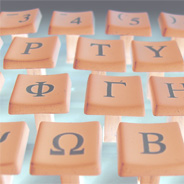 There are lots of references online where you can quickly search and find the necessary HTML code for embedding all sorts of symbols and characters into your web pages.

I find that most of the references I’ve seen are far too exhaustive. So for my own personal use, I put together a chart of the character entity references that I’ve needed the most.

Obviously, what consitutes “common” would vary from developer to developer, but I hope this list covers most of the most commonly used symbols and characters.

In HTML5, as far as I understand, you could technically just copy and paste the character right into your document and it will validate just fine (and as pointed out in the comments, this is the strongly preferred method). If you’re concerned about how these characters are handled when entered into a database or form, then you might want to check out this article on Smashing Magazine, along with the comments.

Also, for the most part, pretty much any symbol can be found with a quick Google search. But like I said, many of the references are often too comprehensive and contain a lot of extra stuff that I don’t need.

Finally, when deciding what is “common”, keep in mind that I didn’t include any symbol that has its own key on most keyboards (e.g. “%” or “@”). Comment if you feel I’ve left out anything that qualifies as “common”. I know there are some accented characters that I’ve left out, so I’m considering doing a separate post that will have a chart of common foreign language characters. Maybe I’ll do that post mañana.