Usability lessons can be learned from virtually anything you use. This concept has been discussed extensively in Don Norman’s famous book, and I thought I’d discuss something specific in this area in this post.

Last week I sent out the following tweet regarding an annoyance with USB plugs:

Many responded on Twitter with similar concerns, but a few pointed out some things I actually was not aware of. So let’s look into this further.

The Problem With USB Plugs

The main problem with USB plugs1 is that, at a glance, you can’t really tell which side is up. Here’s what the type-A kind looks like: 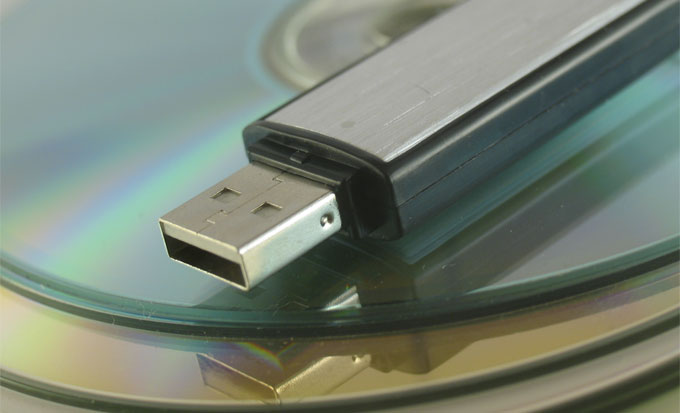 Just looking at that briefly for the first time (or even the hundredth time), a user won’t necessarily be able to tell which side goes up. In order to plug this in correctly, the white strip that you see at the end of the plug (shown here on top) needs to be on the bottom.

But as many of us know, when you’re rushing to plug one of these in, you can’t be bothered to ensure the white side is down. And who can remember that it’s supposed to be down and not up? Not to mention that you have to actually turn the plug around and look directly into it in order to see where the white strip is.

But wait. One of the responses I got on Twitter was from Greg Norman (no relation to Don):

Mock me if you wish, but I had honestly never noticed this before (and apparently a bunch of others on Twitter hadn’t either). But does this truly solve this problem? In my opinion: No, not really. But it does help a bit. Especially when the icon is raised.

Let’s look further into why this is only minimally helpful.

The two cables I use to charge my iPhone and iPad have a power adapter that plugs directly into the wall, into which I insert the USB plug. Here’s what one of those looks like:

The adapter is shown here two ways: Right side up, and upside down. Can you tell which is the right way up? And adding to this confusion, you could plug it into the wall either way. This means that if you happen to plug the adapter in upside down, that means you’ll also have to plug your USB cable in upside down (white side up).

If you want to figure out which is the “up” side of the adapter, you have to look behind the prongs and you’ll see manufacturer’s writing, along with what looks like a green dot: 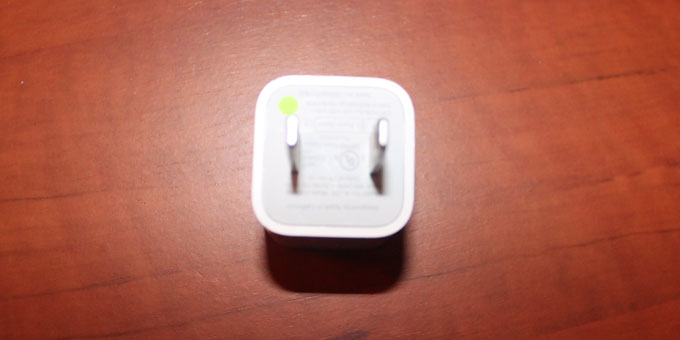 The writing is far too small to read at a glance, and if the green dot is supposed to indicate the right side, is it indicating that it should go up? Or down? Evidently, the green dot indicates where the “down” side is, or else this is just a coincidence and I really don’t know what that green dot is for.

The other Apple adapter is better:

Although this also can be plugged in either way, you can tell from a quick glance which side is up: The smoother side that has no manufacturer’s writing. Much better.

It’s easy to see how this can be confusing. If the adapter is not clearly marked as to how it should plug in, any indicator on the actual USB plug doesn’t help us much. So unless we take the time to ensure the adapter is in correctly (which might later change if we remove it and then put it back), then there’s no way to know for sure if the USB plug should go white side up, or white side down.

As mentioned, the USB plug itself seems to always have an indicator, showing which way is up. But this is not always perfect.

Apple’s USB plug has a clear indicator of which way is up:

But this is useless if the adapter is plugged in wrong. Also, the icon is not raised, it’s smooth. So you might have some trouble in a dark area (although the fact that the cable is white certainly helps).

Here’s another USB cable I have, shown from both sides:

This one has the advantage of a raised icon on the “up” side, but this doesn’t help much. First, the wire is black, so seeing the icon is not always an option in a badly lit area. Second, notice the down side has a sunken rectangle, similar to the up side. If I’m trying to quickly feel for this icon, this doesn’t seem too reliable because the distinction is not great enough. And I can confirm that the two sides feel far too similar for this icon to have much use.

Overall, I think type-A USB usability is pretty good, but can often be annoying.

Having an icon or other indicator showing which way is up doesn’t always solve the problem of the USB plug’s up/down ambiguity. It’s too similar on both sides, thus causing too many annoyances that, as shown above, can’t be solved with a single solution.

The best solution, but far from a perfect one, would be:

The other USB types seem to be easier to recognize up/down, but doing so still requires that you look at the port they plug into. I think, generally speaking, these types of wires and cables will always have some usability problems, but I suppose we should be thankful that they are pretty minimal.

I think it’s good for web app developers to study the usability of these types of things and incorporate the principles learned into web functionality.

So I’d say the main lessons here can be summed up with: Good design is seamless, doesn’t annoy, and doesn’t make you have to plan ahead. From the user’s perspective, function shouldn’t be the focus; it should be an afterthought. That is, it should only be on the user’s mind if it doesn’t work correctly.

1. ^There are a number of different USB plugs. For the purpose of this article, I’m referring to the most common kind, the type-A version.