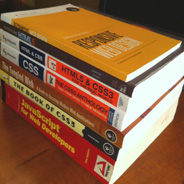 It’s sometimes intimidating and often ridiculous how quickly this industry moves forward. Just when you think you’ve reached “front-end developer” status, you realize there’s so much you still don’t know, or else only know superficially.

Others have expressed their views about our industry and how frustrating it feels, and still others feel that too much is asked of front-end developers.

But we need to face facts: If you really want to be successful in this field, you have to go beyond just HTML, CSS, and JavaScript. I think I’ve gone beyond those to some extent, but I still feel deficient in certain areas.

So I thought I would summarize some skills/technologies/tools that I still think I need to work at. And most importantly, I’d like to hear everyone else’s views on what languages, tools, and technologies you’re planning to get a better handle on.

Speed / Performance
Can you believe I haven’t read either of Steve Souders’ books? High-performance websites are crucial in today’s industry, and although I’ve done research on various aspects of front-end performance, I really need to work on this area.

Browser Developer Tools
Although I use tools like Firebug to track variables and objects with console.log messages, I think there’s too much I don’t know about the potential of these tools. I’m still not sure how to use breakpoints properly, and there are so many aspects of the various tools that are just foreign to me.

Mobile / Responsive Web Design
This one is still an industry infant, so I’m not entirely disappointed with myself for being a bit behind. I’m just about finished reading Ethan’s book and I’ve started using responsive techniques in all my new projects. But there’s still much to learn in terms of performance (yeah, that again), how to handle large images, and whether to take a mobile first approach (I’ll be reading that book next; I still haven’t unwrapped it).

CSS Preprocessors
I still can’t believe I’m so far behind in this area. I have zero experience or knowledge with SASS, Compass, Less, etc. These tools purport to improve the CSS workflow and allow for things like mixins, variables, and they even plug vendor prefixes for you. This is definitely one on the to-do list, but I just haven’t gotten around to it yet. What’s probably stopped me so far is that some of these tools require command-line knowledge and the fact that having to practically relearn CSS isn’t the most appealing prospect.

WAI-ARIA
Although I wrote the appendix in my book on this topic, and I have a good fundamental understanding of what it’s for, I still haven’t used it much at all. I echo the words of Paul Irish: “The fact that we seem to spend more time on div vs article vs. section than on learning ARIA is a crime.”

Better PHP
All the sites I build myself are built in PHP. I know the language enough to build pretty much anything (even something that accesses a database!). But my PHP is awful. Ideally, I’d like to learn Ruby on Rails. But at this point, I just don’t think I have the time or the necessity. I would definitely like to spend more time learning PHP best practices, object-oriented PHP, and common security vulnerabilities.

HTML5 APIs
I’ve written about some of the new HTML5 APIs and I’ve used them to some degree. But stuff like Geolocation, Offline web apps, and Web storage are pretty new to me. These APIs are the future of web app development, and I’m lagging behind. At least one of them should be on my list of things to go deeper into.

Backbone.js / JavaScript MVC
I don’t even know how to begin describing this one (this might be a good intro), but it seems to be all the rage right now. Backbone.js is a framework built on this concept and, evidently, creating JavaScript-based applications in this Model-View-Controller format is super-powerful and much more maintainable.

I could probably add another 10 topics to this list, but those are probably some of the more important ones, and I plan on grokking at least one of these in the months to come.

But what about you? What’s your short list of “things to learn” that you’ve fallen behind on, or just never got around to learning?